Autumn Crown took place in Depedene this past month and, as is tradition, the noble competitors were heralded into the tourney with creativity, skill and panache. Here are some of the boasts.

Your Majesties, Your Highnesses, Your Excellencies, Your Graces, assorted Rabble,

I bring before you Master Alexadre D’Avignon and Lady Agnes Boncuer, these worthy Nobles wish to fight today in your tourney.

One. First, his voice is the first voice many people will hear at any given court. It is Distinctive!
Two. Seconds, as anyone who has eaten one of Master Alexandres feasts will say, Yes please!
Three. Orders, have asked this man to be one of their members, the Laurels, the Pelicans and the order of Defence. And 4. Quarter, is what he will give to his opponents on this field today when they fall before him.

Additionally, have you seen him? Look, look at that hair, LOOK at that hair! I mean, I was looking at it this morning and I was thinking, Maybe he’s born with it, maybe it’s Majesty!

With regards to Lady Agnes, I genuinely, genuinely struggled to properly come up with a boast for Lady Agnes.
Not because she is not worthy of this, she is manifestly worthy.
Eventually yesterday, on my travels here I realised, the word for Lady Agnes is Solid.
Lady Agnes is the Bedrock of fighting in this kingdom, she is the Oak Beam that holds the walls up.
She has taken so many fighters under her wing, several of which are actually fighting before you today.
She is worthy of this Honour.

Comes now Yda with purpose true
With sword and wisdom shining bright
To test her skill and show her might
As Drachenwaldi warriors do. 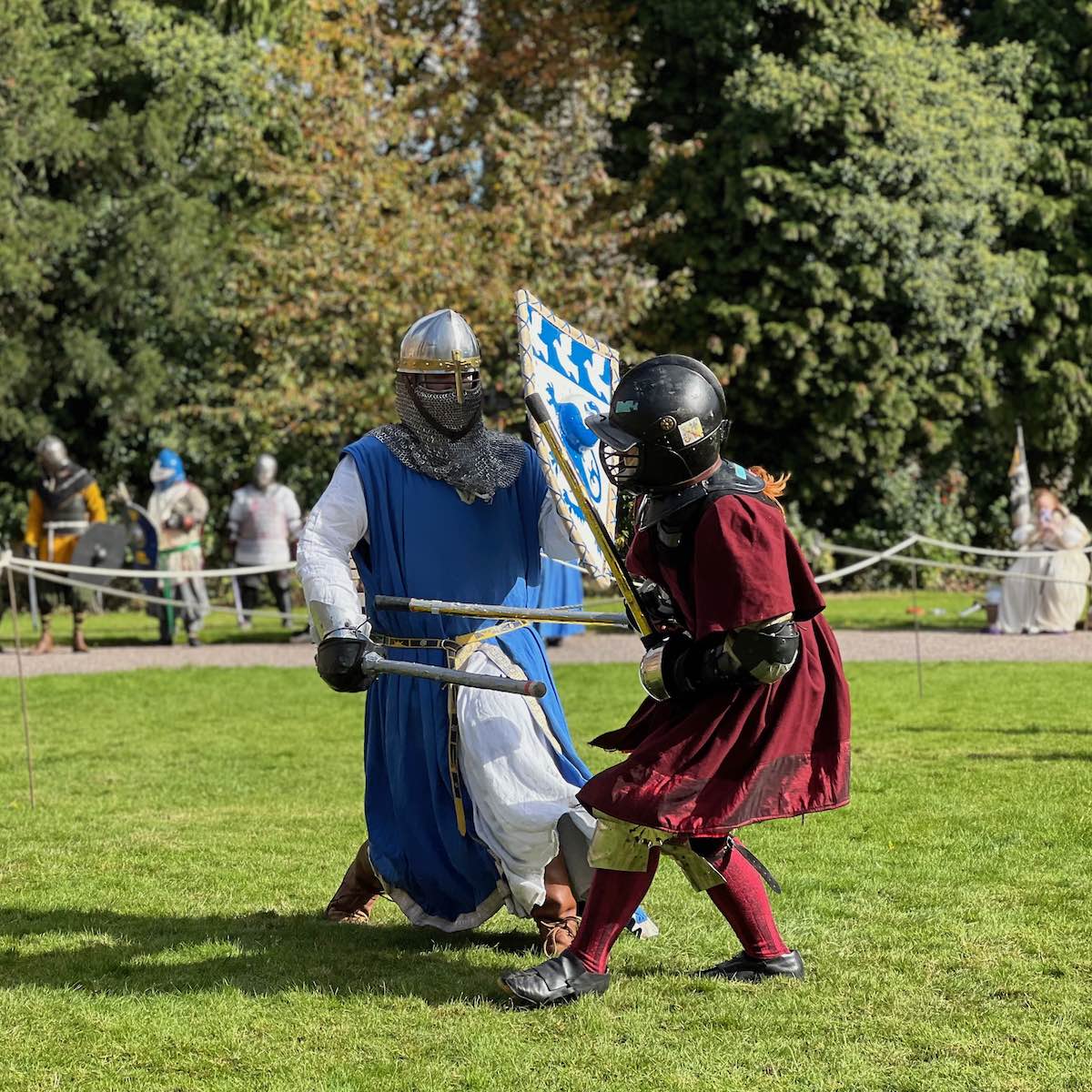 Sela, dame of great insight,
Inspires Yda with courage new
So that her foes this day will rue
That Yda they must face in fight.

For Yda, swift like striking kite,
Will swing her blade, her foes to hew,
While Sela urges her anew,
With visage full of lambent light.

Fair Sela, web-scop, wise and true,
Whose worth is more than silver bright
Gives counsel, so her champion might
Great deeds of valour this day do.

By Joel ben Stuart (some assistance from Lin Manual Miranda)

Your Majesties, your Highnesses, your excellencies and everyone else!
I am Joel ben Stuart, you know who I am!
When I win this this tournament I will be but one of a line of men who have won this great honour. 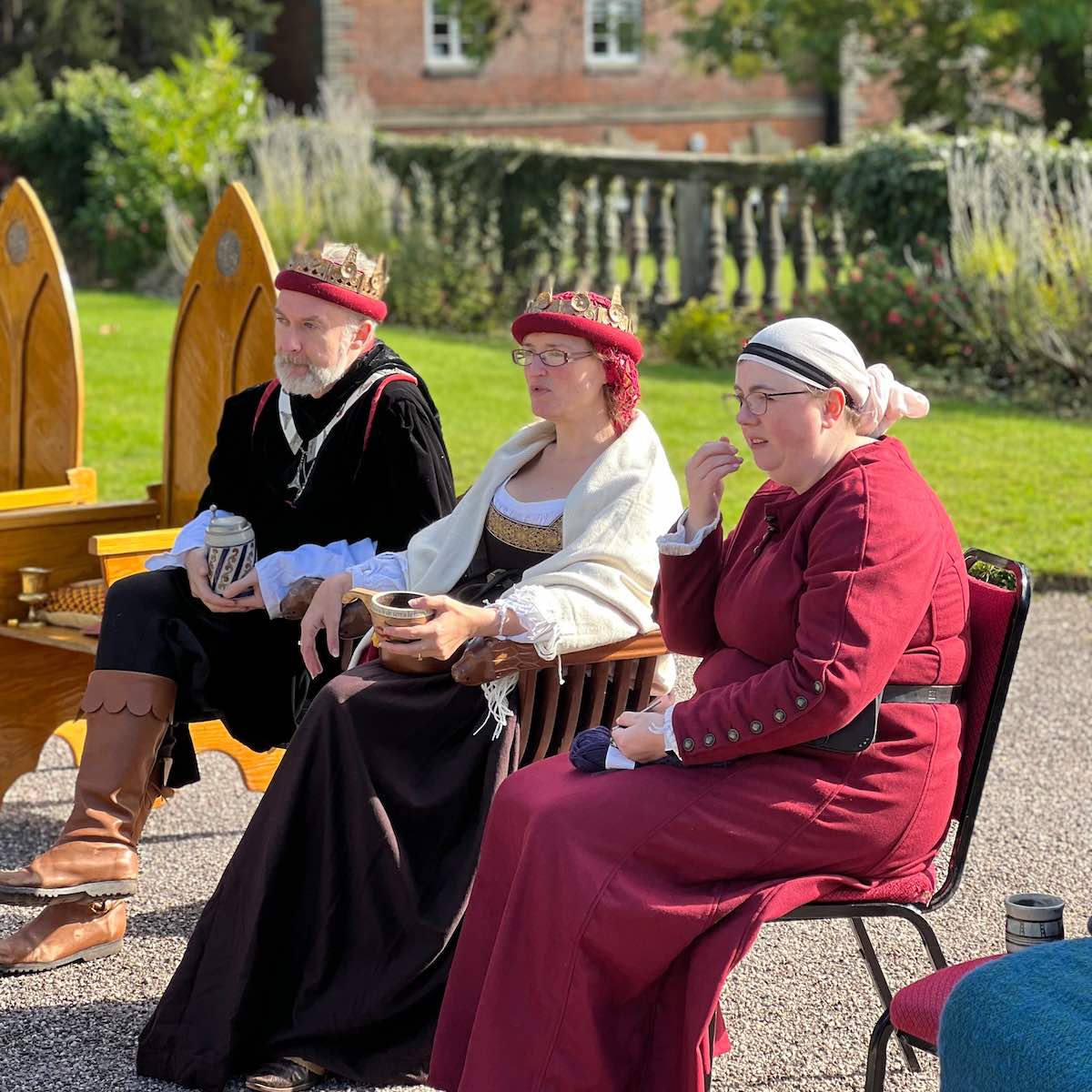 Deadly with a sword - dragon’s steel and defender both - more devastating still in her magnificent attire, her snow white defender’s collar blinds her opponents! Her deep, dark, beautiful and costly black gown strikes terror in their hearts… …but fear not for your safety today!

Today she lends her inspiration to Lord Valdemar Rodvilde, squire of her household, guardian of the Vita Porten, to mighty deeds in her name, to advance her renown, and ensure the line of Drachenwald.

Orianna and Alex of Longriston

Your Majesties, your Highnesses, your excellencies and everyone else!
My last boast was a bit on the long side so this one is snappier! Let me introduce these two!
Lord Alexander of Longriston.
Lady Oriana Nic Kendrick.
He is a badger loving piper, a fox, a doughty warrior a drummer and an all round great guy.
She is a glamorous seamstress with a client list that includes mercenaries, princes and queens!
Together they fight crime!

Wait a mo…
Together they fight in CROWN!

I would speak of virtue of skill and of service for it is of these things are Kings and Queens made.

Any who have meet Lord Jon upon the field know of his Chivalry on field. Word of his noble deeds has spread across the kingdom and beyond. His generosity and nobility shine for all to see. Maestra Ellisif’s courage to do the difficult, tedious or unglamorous is a sign of her nobility. Her Generosity both in time and energy helps create a strong, rich kingdom.

Ellisif’s skill with the loam and the brush is well known. As is the joy which she teaches those skills. Jon’s is not without skill most recent he has been casting pewter.

Although they have relatively recent moved to Drachenwald there service is well known. If John had a pound for every tent peg he pounded in at Double Wars he would be a very wealthy man. Ellisif gives of her time to create works of art that decorate many home and also rans and helps to run events. Together they are strong pillars that support our kingdom.

Sure and swift
Shrewd with sage council

Fell to foes
Firm in Friendship

Beatrix
Fast is her friendship
Famed her fairness

Certain in steering the ship
Bringers of the spear storms

Each inspiration and inspired
United and unbending