Safarjaliyya (from safarjal, Arabic for ‘quince’) is found in multiple period sources, including the two I consulted: A Baghdad Cookery Book and An Anonymous Andalusian Cookbook of the Thirteenth Century. The two recipes agree on the fundamentals (meat, vinegar, coriander seed, quinces, and saffron) but differ in execution. Andalusian has the meat cooked in oil, additional flavour from pepper, caraway and onion, and a thickener of eggs; Baghdad cooks the meat in “tail fat” and adds salt, cinnamon, mastic, minced meat ‘with the spices for meatballs’, rose water, and almond milk as a thickener.

I had started out looking for a medieval quince recipe for Okynfirth’s Autumn Revel because I’d seen a few weeks earlier that my mother in law’s quince bush was loaded with fruit. However, by the time the day came the quinces had become overripe and were no good even for cooking. Undeterred, I scoured the local big supermarket and came away with a jar of quince jelly. I was also unable to get mastic before the event, and knew one of the revel attendees has a nut allergy, so I ended up combining the two recipes to create my own version.

Measurements are homely because I was cooking at a village hall and forgot my measuring spoons; I would recommend tasting at every point! 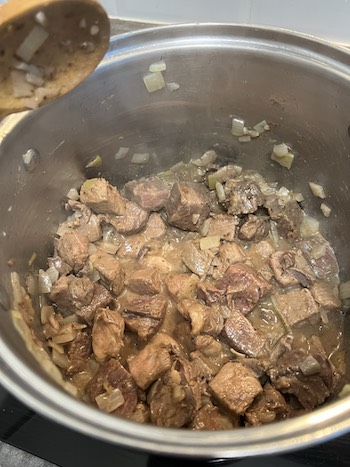 This was a meaty, rich, sweet-sour tasting stew, which went excellently over rice or sopped up with thick slices of buttered bread. It didn’t have the most attractive colour – hence the suggestion of adding a lot more saffron – but the taste more than made up for it!

A Baghdad Cookery Book, a translation by Charles Perry of The Book of Dishes (Kitāb al-Ṭabīkh) by Muḥammad b. al-Ḥasan b. Muḥammad b. al-Karīm, the Scribe of Baghdad. Prospect Books, 2005.